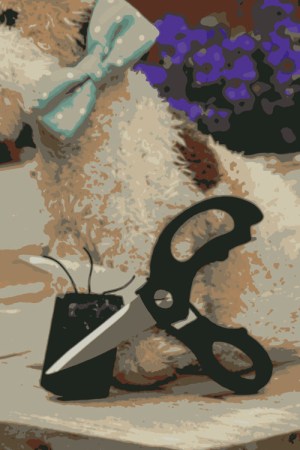 Today I am wearing my Blue Dotty bow.

Things are getting back to normal. I mean, it was all change over Christmas and New Year, with everyone around, lots of tinsel and stuff but now, it kind of quietens down. However, we are still, or were, in a strict regime of new year resolutions.

The Old One is the main culprit. Every year he is going to do better. He’s going to walk more ( like that happens now it’s turned colder), he’s going to stop some of his bad habits like….well, best not go there. But this year he said he was going to be more calm, not lose his temper at minor irritations and generally, as the teenager of the house says, ‘chill his beans.’  An unlikely scenario.

With every one back to work and school and the indoor decorations down and put away, the Old One promised to turn his attention to the twinkly lights in the tree at the front of the hose. Now, it took him the best part of a day to put them up, with the help of two ladders, a long handled brush, his reading glasses, a screwdriver and other essential items such as mugs of tea and biscuits. I helped of course. I sat patiently near the tree watching. I have to admit I had a little wander after an hour but he soon found me. I felt he needed the break.

Anyway, it soon came time to take the installation down. ‘Come on Johnny, lets sort the lights out’ and out we trotted. Remember, this is a chap who has resolved to chill his beans and stay calm. The first test was the garage lock. The key is wonky ( not guilty – I tried but the metal was too hard to bend) and difficult to get into the lock. But he did it without any cursing. Second test was dragging the ladders from the ever burgeoning garage. I don’t know why he keeps those empty cardboard boxes, but the one that the turkey was delivered in still had faint traces of loveliness so I played with that as he struggled but succeeded in extricating the bits and bobs he needed. He didn’t bark when I helped with unplugging the wires from the extension lead. It seemed like he was in total control, keeping calm and his beans were well and truly chilled. Then the heat was turned up.

Ladders can be awkward. I know this after getting stuck on the second and third rung. Disorientating I say. But not apparently this time. Securely wedged in the tree branches with additional anchorage at the base he was ready to go. And he did. Like a ferret up a drainpipe. His plan was to locate the ‘easy to find end’ of the lights to start winding back from there. I sat and watched. He kind of talks out loud these days as he’s doing things and apparently he was struggling to find the knot at the end of the lights. ‘I need to find the end’ he kept saying. Now, a dog can only take so much of this so I went for another sniff and furtle in the open garage. ‘Not now Johnny. Come back’ came the command. I stopped, looked back to see him stretching for the apparent end. Now, like you, I thought ‘here he goes, he’s over’ and waited for the fall. But no.

‘Oh never mind. I can’t find it. I’ll wind them in from the start of the lights.’ And down he came. I was truly amazed. It had the hallmarks of a slip, scrape, crash and nee-nah of ambulance about it (like the time he blasted the wallpaper stripper into his own face but that’s another story for another time) He scampered down, moved the ladders and started to wind the lights in from the base of the tree. He was calm. He was content. His beans were almost at freezing point. A changed man. Then it happened.

Lights, as we all know, have a mind of their own and the wires somehow get wrapped around each other, the twigs of trees, the knots in the trunk, passing cars, overhead cables, me, the legs of lads and lags, ladders, in fact anything and everything. So much in fact it’s enough to heat beans.

He flipped, the Old One, snarling ‘That’s it. I’ve had enough of these stupid things’ and dropped everything. He stormed to the garage, me slinking to the side to watch from a safe distance, as he emerged brandishing scissors.

‘I’ll give you tangled’ as he set about the wires, cutting them into small sections and throwing them over his shoulder. ‘You’re not tangled now are you’ he snarled as an elderly lady supported by a walking frame shuffled by. She looked at the Old One. She looked at me. I’m sure her eyes said ‘Come home with me, you”ll be safe there.’ After several minutes of manic hacking and sawing, the lights were indeed off the tree. Unfortunately they were in small sections all over the path. The Old One looked at me. I looked at him.

‘Don’t tell anyone Johnny. No one will remember in a years time. I’ll get some new ones.’

Don’t worry ‘Mr not-so-chilled-beans-now’ I won’t. OK, I won’t if you defrost a kilo of  leftover turkey. Deal?