Shirt off your back 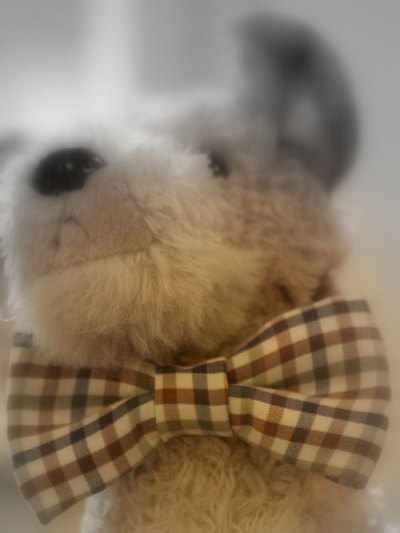 Today I am wearing my brand new checky bow.

I keep getting dirty looks and it’s really not my fault. Really. Obviously it usually is but I’ve been set up. The thing is, I went to your very own Bow Tie Maker and the Old Un’s house for a couple of days of wrapping them round my little claw, getting chicken pieces hand fed at a drop of a hat and generally lounging around, snoozing in the ever strengthening late winter sun and having a good old time. But something rather disturbing happened half way through the first day of the stay.

There I was, paws over his lap as we both slept. Old Un wheezing a bit ( chest infection – he’ll be fine) and me, well, doing nothing. I heard the gentle padding of slippered feet up the stairs. Nothing to worry about I thought, as I hadn’t heard the front door open. Can’t be anyone except the Bow Tie Maker. She just doesn’t stop. She isn’t allowed to with all the orders coming in. It wears me out. Anyway, I heard the distant footsteps upstairs and thought nothing more about it. After what could have been minutes but was probably more like a couple of hours, I heard the call.

Now, I’m a tad sprightlier than the Old Un and with infinite better hearing. I jumped up, nosed open the door and dutifully strolled into the kitchen. There it was, not the bow tie maker, but a new bow. And it looked good. Checky, somewhat familiar yet fun and new. It was fitted, adjusted in seconds and there I was, looking good. The bow tie maker made the usual fuss but I wanted a more neutral opinion. After all she had made it, so was honour bound to like it, but the Old Un?  Well, if he likes something it must be good. So, I trotted back into the lounge where he was still asleep. I nudged his hand. Nothing. I weaved under his outstretched legs, he shuffled a bit but nothing. I licked his hand. A kind of snorting and guttural hack but no eye movement. Good grief man, I’m here, new bowtie and you’re still dreaming. And we had been called a few minutes ago so if history is anything to go by, that was only going to escalate. I had to play the big card. I barked. He jolted, looked around, focussed on me and said

‘Good lad Johnny. Only resting my eyes. All OK? Nice bow tie by the way.’

And that’s all I needed.

It’s a pity the story doesn’t end there. You know, a happy ending, where we all tucked into chicken, followed by a minute or two outside then back in to get stuck into some proper antisocial eye resting all evening. But no. It doesn’t end there. The Old Un came into the kitchen. I followed. There was the usual ‘stop getting in my way’ from the Bow Tie Maker to the Old Un, a bit of kettle steaming stuff, oven door open and closing, jowl jingling aromas and…..the Old Un opened the pedal bin lid to put something in. It was that simple: He opened the pedal bin lid to put something in. But he also saw the remains of his favourite shirt covered in egg shells, coffee grinds and the remains of my tuna lunch. He opened the lid and saw all that. Goodness knows how he must have felt. His favourite shirt.

‘Yes it is’ the Bow Tue Maker said.

‘Yes it is’ she repeated, not easily tripped up with this line of enquiry.

I actually thought the Bow Tie Maker was going to laugh when he cautiously picked it out, held it up, and peered through the holes.

He looked around at me.  Our eyes locked. Oh come on Old Un. Firstly I was with you (if only you opened your eyes to see who was sprawling on you) and secondly, I’m the model not the manufacturing department. I can’t operate a sewing machine or get thread through the eye of a needle. Crikey, I’m only wearing it because she, and I shot my glance at the Bow Tie Maker, made me, tempting me with a piece of bacon and a crumb of best Lancashire cheese.  What choice do I have? Take it up with her……

But he didn’t. He knows which side his bread is buttered. He said it looked great and is a perfect example of how a bow tie can be made out of virtually anything – even a favourite shirt ( now with a 40cm square piece out of the back, another from the front and minus buttons squirrelled away just in case, the rest gently marinating in discarded, semi solid fish)

After a rather subdued meal everything settled down back to normal. The telly was on, the Old Un resumed resting his eyes (they must be very tired) and I continued to look great in the new bow tie. I did feel nervous when I heard that gentle padding of slippered feet up the stairs. She’s at it again. Nothing is safe or sacred. Bespoke bows look great but can tear a family, or at least a shirt apart you know.